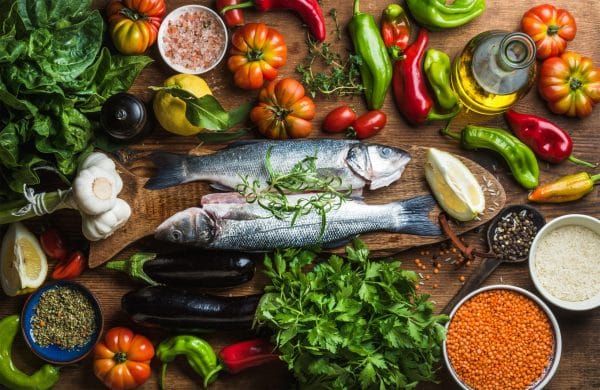 Some key ingredients of the Mediterranean diet

In our summer edition of Diabetes Matters, we’re looking at some of the most popular diets and eating styles and helping you decide which approach to food might work for you. Read our other Eating Style articles here.

Most diets tend to be based around what they cut out – carbs, calories or large portions. One of the oldest and most successful is much more about changing your eating style. Backed by decades of study, the Mediterranean diet encourages a shift away from the stodgy staples of Western cuisine towards lighter, more varied fare.

Its key elements are plenty of plant-based and seasonal foods, nuts, moderate amounts of dairy, poultry and fish, and olive oil as the principal source of dietary fat. It’s also renowned for being one approach to eating that doesn’t sacrifice taste for health!

Dr Antigone Kouris-Blazos is an experienced and highly published dietitian and academic who has extensively studied the benefits of the Mediterranean diet for the general population and people living with chronic conditions.

She says she recommends the Mediterranean diet, along with a shift towards eating more plant-based food, to all the patients she sees in her private practice. Why is that?

“Because of the overwhelming evidence showing that plant based diets are protective against the development of chronic conditions such as heart disease, diabetes, cancer, dementia, depression.” A  large study of more than 7000 people conducted from 2003 until 2011 found similar benefits. For people living with diabetes, this research found greater benefits on glycaemic control, body weight and total cholesterol for individuals who closely followed a Mediterranean diet compared to those who followed a low fat diet.

Researchers have suggested several theories around why this style of eating has shown such a positive long-term impact on weight loss, blood glucose levels and cardiovascular risk. Most theories agree that the potent anti-inflammatory and antioxidant effect of the Mediterranean diet is what makes it so effective. It is well known that individuals living with diabetes are more prone to inflammation in blood vessels

Many people find themselves eating less meat and more plant-based foods on switching to a Mediterranean style of eating, sometimes going vego for a few days every week, which Antigone says mirrors the meat-free days devout Greeks would traditionally observe.

She’s aware the Mediterranean eating style might involve a big shift in how many Australians think about food, but they shouldn’t be discouraged if the thought of preparing a radically different cuisine seems too much to take on.

“The cuisine aspect of the diet might be off-putting if people think that they have to cook in a Greek way, or Mediterranean way, but that’s not really the case. The principles of the Mediterranean diet can be worked into any plant-based diet.”

Anyone curious about giving the Mediterranean way could start by following three key steps, Antigone says.

Step one: become a part-time vegetarian.

“Use extra virgin olive oil as your source of fat. It’s been shown that all the polyphenols in olive oil seem to help reduce blood sugars and improve the gut microbiome.”

“Cooking meat and vegies in tomato salsa (or sofrito) is a key feature of the diet. Tomatoes are very high in antioxidants. In one study, participants went from eating 20 grams of tomatoes a day to 100 grams a day. There was a very strong correlation between eating more tomatoes and increased antioxidant levels in the blood.”